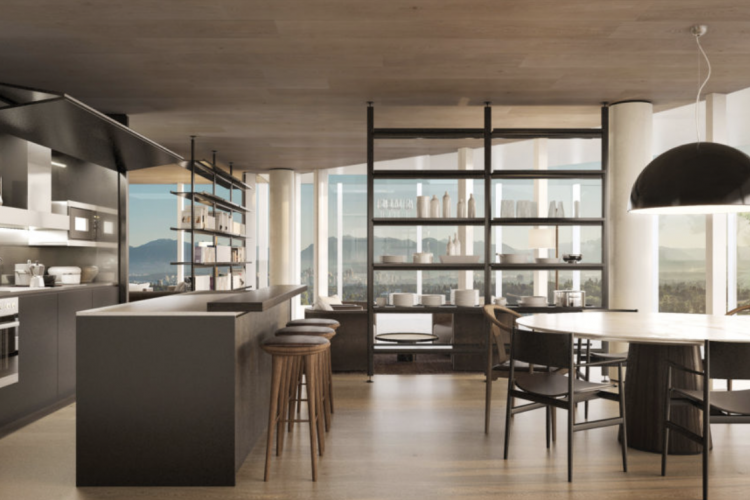 The celebrated architect and designer wants to foster community with his simple, fluid style at Vancouver’s mammoth Oakridge development.

Piero Lissoni, the esteemed architect and designer who’s produced goods for equally respected Italian labels like Alessi, Cassina and Knoll International—in addition to dreaming up some of the most luxurious hotels in the world—isn’t averse to taking a chance or two. But even he admits he’s unsure of his latest project, the interior design of Building Four, the largest residential tower at Westbank’s mammoth Oakridge development in Vancouver.

“To be honest, it’s a risk,” he states plainly. We’re seated in what Lissoni describes as a “super-prototype” of one of his designs at the 42-storey Building Four—aptly named the Piero Lissoni x Oakridge—which, once complete in 2027, will be part of a 4.5-million-square-foot community that includes residential, retail and office spaces, as well as a 10-acre park, Vancouver’s second-largest library and a performing-arts academy that will be the home of Goh Ballet Academy.

The prototype room is situated within Westbank’s Unwritten exhibition at Oakridge Centre, and is simple, modern and fluid in both style and function. Walls and smooth hardware-free cabinetry are made up of the same locally sourced dark-stained wood, their unadorned surfaces complemented by a low-profile leather sofa in the living room and a mix of molded-plastic, metal and teak wishbone chairs in the dining area. A Miele cooktop and undermount sink practically melt into the kitchen counter, while the fridge—tucked behind the minimalist cabinetry, natch—sits neatly alongside a set of stainless-steel wall ovens, also by Miele.

Much of this contemporary design is par for the course for Lissoni, though the “risk” the designer refers to here is the lack of walls in the suite that, traditionally, would be separating one room from another. And while open-concept spaces are nothing new in the realm of interiors, Lissoni takes his “blank-slate” vision to the next level by incorporating Murphy beds that can seamlessly be tucked away and, in the kitchen, horizontal sliding doors by Boffi that glide down with a click of a button to hide the sink, stovetop and open shelving—as well as any spills and messes—in the event of unexpected guests or if you simply want some cleaner sight lines.

“The idea is very simple,” Lissoni explains. “I suggest we design a unit like an open space without partitions. Of course, there are some, for example for the bathroom . . . but for the rest of the house . . . we took away partitions. Everything becomes, if you like, a completely transparent house.”

This pared-down design extends into Building Four’s communal spaces: a library, gym, kitchen and even music room where residents will be able to converge for a little leisurely time. So while the absence of partitions—and inclusion of convenient sliding doors—aligns nicely with Lissoni’s m.o., they serve a different purpose here: to encourage engagement among friends and strangers and, ultimately, spark connections between inhabitants. “I think one of the diseases in condominiums is that nobody talks with nobody inside,” notes the designer.

The Piero Lissoni x Oakridge suites don’t come cheap—prices for one-bedroom units start at $1.3 million, according to a sales sheet shared on social media—but Lissoni is hopeful that the open and “community-oriented” feel will appeal to urban dwellers. Or those with deep pockets, at least. “The idea was to design something more dynamic,” he says. “It doesn’t matter if it’s a one-bedroom, a studio or a penthouse.”